What Makes Mel Kiper an Expert? This and Other Draft Questions Answered Who is Mel Kiper, Jr. and what makes him an expert on the draft?

Mel Kiper, Jr. is a self-appointed “draft guru” who first appeared on ESPN’s draft coverage in 1984 as an analyst.   A few years earlier, he recognized the demand for a centralized source of draft information on college players and began publishing The Draft Report.

Kiper is well known for criticizing NFL teams for their draft selections, famously stating the NY Jets “didn’t understand what drafting was about” following their selection of DE/LB Jeff Lageman in 1989 (Kiper believed that Lageman would have been available with a much lower pick) and getting into a public feud with then Colts general manager Bill Tobin, after the Cols selected linebacker Quentin Coryatt with the second overall pick in 1992.

As to where he came from, while experts agree that he most likely came from Mel Kiper, Sr. and Mrs. Kiper, I am convinced that he was grown in a pod a la Invasion of the Body Snatchers.  I mean, look at the hair. . .that ain’t human. 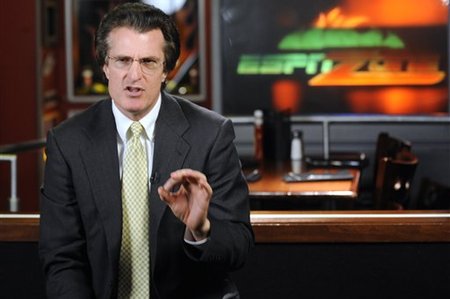 What is trading up and trading down, and why do teams do it?

Trading up or down refers to using other draft picks or players to change your draft position.  Example:  Let’s say the Eagles have pick #20, but want a player who they think will get taken at #12.  They may offer the team with the #11 pick their #20 pick PLUS something else (usually a pick in the later rounds, but sometimes a pick in a future year’s draft or a player) in order to “trade up” to #11.

Why would the team who has the #11 pick not use it and trade down?

Several reasons.  First, the team with the #11 pick may want a player who they can still get at #20, so they can get an extra draft pick and still get the player they want.  Or the team #11 may have been hoping for a certain player to fall to their spot but he may be gone.

Who decides who to pick?

It varies by team.  It can be the owner, general manager, director of player personnel, the coach, or a “committee” that is a combination of people.

What is the point of a mock draft?

Some people criticize mock drafts because they are not particularly accurate and there are so many of them on the internet, but mock drafts are not weather reports.  They are simply a way of sparking discussion and debate about what players will get picked in the early rounds (and what players may get overlooked) and what areas teams will choose to address.  Mock drafts are for fun, not really for information.

So what do I need to do to sound reasonably informed when I attend a draft day party?

Take a look at some player rankings so you have an idea of who the best prospects are at each position, especially the positions your favorite team may be looking for.  Read over a couple of mock drafts.

Get an idea of who may be on the board when your team is on the clock.  Pick a player or two you are hoping your team will draft and then keep an eye on the ticker to see if those players are still there.  Most important, read the upcoming Mock Draft and related articles on this site!  We’ll make sure you know what you’re talking about.

Anything else I should Know?

It can always help to know a little about the interesting moments of draft history.  Here’s a handful  of famous and infamous draft names:

“Class of 1983” – this refers to the first round of the 1983 NFL draft, which is considered by most to be the best group of quarterbacks ever taken in a single round.  It included future Hall of Famers John Ellway, Dan Marino and Jim Kelly, along with Tony Eason, Todd Blackledge and Ken O’Brien.  This phenomenal first round also included  three more Hall of Fame players, running back Eric Dickerson, offensive lineman Bruce Matthews and cornerback Darrell Green.

Tony Mandarich – one of the all-time NFL draft busts.  He was taken with the second overall pick in 1989 by Green Bay, ahead of future Hall of Famers Barry Sanders and Derrick Thomas and ahead of superstar cornerback Deion Sanders.  Eventually revealed to be a steroid user, Mandarich, a 304 lb. offensive lineman with seemingly impossible physical abilities, simply could not play NFL football, struggling to even get on the field for the Packers and eventually being cut after three seasons.

Ryan Leaf – another all time NFL bust, there was ample speculation before the 1998 NFL draft about which “great” quarterback would be selected first, Leaf or Peyton Manning.  Obviously, the Colts took Manning who was being described as the more “polished” quarterback, as opposed to Leaf, who supposedly had much better physical skills.   Leaf was awful, lasting just three seasons and compiling a career won-lost record of 4-17.

Randy Moss – a projected top 10 pick in 1998, off the field and “attitude” issues plagued the talented Wide Receiver, causing 20 teams to pass on him in the first round before maverick coach Dennis Green of the Minnesota Vikings finally took him #21.  The irony was that the Vikings did not need a wide receiver, but Green recognized that Moss was no ordinary player, and he was instantly justified with Moss’ on the field performance.  In another ironic turn, the Tennessee Oilers (now Titans) were the only team to actually pick a wide receiver ahead of Moss, taking Kevin Dyson at #16.  Dyson, of course, later became famous for getting stopped just inches away from the goalline, sealing the St. Louis Rams win over Tennessee in the Super Bowl.

Tom Brady – the four time Super Bowl champion quarterback was drafted in 2000 by the New England Patriots, but it took until the second day of the draft for it to happen.  Brady wasn’t taken until the sixth (next to last) round, and in all 198 players were selected ahead of him.

“Mr. Irrelevant” – the name given to the last player taken in the NFL draft each year.  It has become something of a badge of honor to be Mr. Irrelevant and, in any case, the moniker is somewhat misleading.  While it is certainly a longshot for players taken in the 7th round to make NFL rosters, every year there are low round players who do so and, on almost every NFL roster, players who do not get drafted at all make the team (these players are known as “undrafted free agents”).  Consequently, “Mr. Irrelevant” can at least take solace in the fact that a team felt strongly to use a pick at all to add him to the roster.

“Workout warrior” – a phrase used to describe a player who excels at the combine, but it just not that good on the field.  It is perhaps most closely associated with former Eagles defensive end Mike Mamula, who, it was later revealed, spent weeks practicing the specific drills he would be running at the scouting combine to artificially inflate his performance.