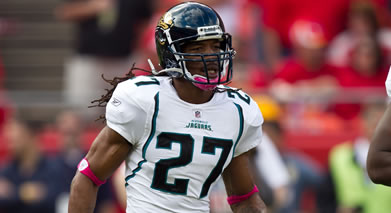 While watching our favorite teams, whether live or on TV, most of us are guilty of shouting insults to players that in that moment, we hope they hear.

But if you were to see that same player out in public and out of uniform, chances are, you wouldn’t shout those same insults to him. This was not the case for Jaguars Corner Rashean Mathis.

While at dinner for a charity function in Jacksonville, I was talking Jags with my table of friends @JLeeper23 and @Islandchaser2 when the server told us about a horrible story he witnessed a short while ago.

The server “John” (name changed for anonymity) said he was working one night when locally raised and defensive star on the Jaguars Rashean Mathis came in for a nice dinner with his family.

Rashean barely had time to finish his salad before a nearby table of what John presumed to be high school guys, walked over to Rashean’s table and said to him “I can’t wait until the Jaguars trade you”. John said he stood there shocked as the kids laughed about it, went back to their table and continued to heckle Rashean who was sitting with his family just a few feet away.

Hit the jump to continue reading…

John was even more astounded when tables around Rashean and the “fans”, who presumably did not arrive with the jerks, actually shook their head in agreeance with what the assholes kids were saying to Rashean.

John said “Rashean never said a word to them or gave them a dirty look. He simply got up and walked away from the situation only to come back later on and finish his meal”.

As die-hard Jags fans, this absolutely disgusted all of us listening to the story. John, as a recent transplant from Atlanta, said “I thought all Jaguars fans were like that after that night”. We all assured John that we absolutely were not.

In fact, if I witnessed this taking place, I would have stood up and scolded everyone around as if I was their pissed off mother. How dare you think you walk up to a grown man while he is with his family and say something like that? Who the hell do you think you are?

Sure athletes get paid to play a sport and they are in the public eye, but no one, and I mean NO ONE deserves that kind of treatment.

After sharing what I heard on Twitter, the response from the real fans was immense.

As a result, it was my good friend @TDJaxTim’s idea to gather the appalled responses in hopes of sending this to Rashean to let him know just how much we value him as a player and leader, on and off the field.

Below are the responses:

@flajags: The owner should have thrown them out.

@feeltheteal: I cannot believe a fan did that to Mathis or to any player for that matter. That is just terrible to hear.

@eharris79: Thats a terrible story. Poor reflection on us real fans. No one should ever be treated like that around their family.

You gotta be pretty ballsy to pull something like that.

@tdjaxtim: This @GuysGirl story about people talking to Mathis at dinner is appalling.

@bophilpot: i love mathis been a great player for us. F*ck those fake fans

@jleonard777: makes me sad as a Jaguar fan that someone would do that. Doesn’t surprise though the way people tweet to players. #sad

@frankdatank101: that shit wouldn’t of happened on my watch.

@caseyayers: Not sure whether I feel more empathy for Rashean or rage toward the troll pr*cks.
Perhaps most enlightening, came from someone across the county who already knows how lucky we are to have a team in the first place, no matter the record we currently have.
@gyt: Those “fans” don’t understand how lucky they are to have a team in their city. :/
After a tough home showing this year by the Jaguars, it’s understandable that fans are a little annoyed about the team’s lack of production. But that is absolutely no excuse to embarrass a player out to dinner with his family. My only hope is that Rashean knows these “fans” do not reflect the attitude of the entire Jag Nation.

No player, no matter the team or performance, deserves that kind of treatment.

In 2011, before succumbing to an ACL injury in late November, Mathis was the 4th best corner in the league against #1 wide receivers. Rashean was born in the Jacksonville area, went to college around here and now plays in his home town. It’s an ideal situation I can imagine almost every pro sports player would dream of having. Give the man the respect he deserves.

To the kids who chose to disrespect Mathis, I surely hope none of us real fans are around for you to pull a stunt like that again. Because there are plenty of us who would have his back and show the support he deserves that he did not receive that night.

But to look to the future, let us all hope the following person is correct when the Jags return from their bye week to face Oakland.