Remember the Red Book Bilbo Writes In During The Hobbit? Found It. And It’s Beautiful. If you have ever seen any of the Lord of the Rings movies or more recently, the Hobbit, you may have noticed a red book that Bilbo, Frodo and Sam all are seen writing in, diary style.

And when it caught my eye, I decided to do an impromtu Google search to see if there was a prop replica. To which I found both the name of the red book and one of the best replicas from a movie you can lay your eyes on dubbed The Red Book of Westmarch.

For LOTR fans, you may be wondering what the Red Book of Westmarch is.

“According to J.R.R. Tolkien’s lore, the entire tale of The Hobbit and The Lord of the Rings was translated from a collection of journals entitled the Red Book of Westmarch. Originally written by Bilbo Baggins and expanded by his nephew Frodo, the Red Book then passed into the hands of Samwise Gamgee who finally entrusted it to his eldest daughter Eleanor. It was visited by the other peoples of Middle Earth who contributed to its appendix”.

So Tolkien was so detail oriented with Middle Earth, he created journals from which the books are based on? Just another reason why he has had such a devoted fan base for so long. 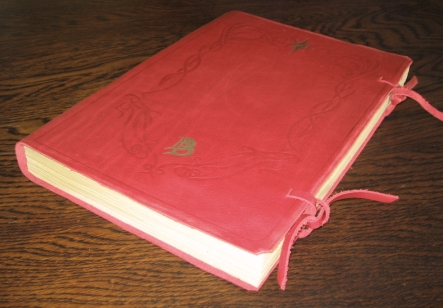 The website Indy Props, which has a stellar collection of LOTR and Indiana Jones replicas (among other movies) is responsible for the excellent craftsmanship of the entire book. But as your momma should have told you, it’s what’s on the inside that counts.

“Replicated here as the original volume begun by Bilbo and continued by Frodo, this leather bound book is divided into several sections: The Hobbit (or There And Back Again) is written in Bilbo’s own hand, who continues with some notes from the Libraries of Rivendell. The Lord of the Rings tells of Frodo’s adventures of inheriting and destroying the One Ring of Sauron. Frodo then passes the book onto his friend, Sam Gamgee, who in turn records several poems he heard or composed during his lifetime. Finally, the appendix to this volume contains poems and histories from the Men of Gondor, Rohan, the Elves and Dwarves of Middle Earth.”

Did you see the part where it says “in their own hand”? The book actually has all of the text replicated as if the Bilbo, Frodo and Sam had wrote this book themselves and handed you a copy.

Take a look at the samples from the pages inside the book…. 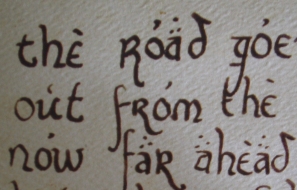 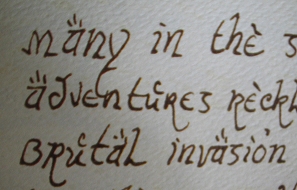 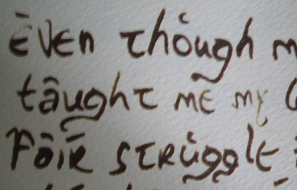 Just the fact the book has the characters from LOTR using their handwriting is enough for me to think about hookin’ on the side of the street to get this book in my hands.

But that’s not all, also included int he book are six maps, sixty-five drawings, six family trees and dozens of poems. Check out a sample of just a few of the drawings…

The Weapons of the Fellowship 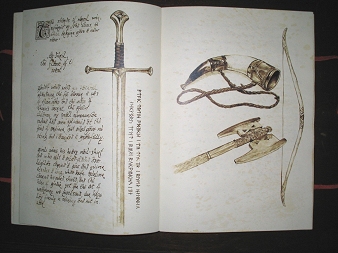 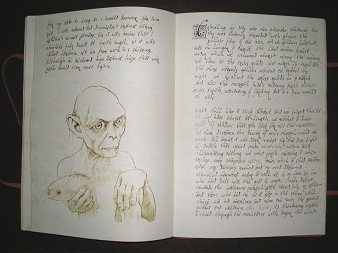 Elvish Poem on one side and translated on the other side 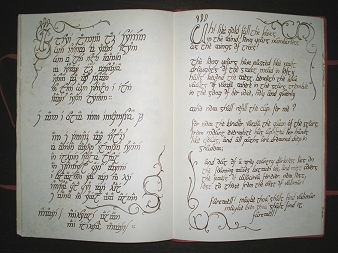 There are many more pictures of the book at the Red Book of Westmarch website to drool over.

The book itself is constructed very well. “Measuring about 8 1/2″ x 12″ (22 x 30cm), this prop replica is bound in genuine red cowhide, embossed with elvish designs and silver foiled with a star and Bilbo’s “BB” monogram. The pages are high-quality textured writing paper, laser printed and finally aged by hand giving them a time-worn appearance. The book is complete with matching leather ties, just like the original prop from The Lord of the Rings.”

The book is pretty steeply priced at $495 with some extras you can add on. Though it might seem ridiculous to pay that much for what is essential a movie prop replica, if there is anything I would spend that much money on, it would be this book.

You can send any LOTR donations directly to me. I promise it’s worth the investment.