The crack of a wooden bat, the sound of the baseball hitting the leather glove during warm ups, how green the gas looks while it contrasts perfectly with the dark clay and bright white lines.

No longer are these sounds from neighborhood kids or just a Spring Training game that seems meaningless.

Because it’s two of the best words known to man:

It’s a word that rings so close to home for many baseball fans. The  only day of the  year where all teams are created equal.

Last year’s collapses are a distant memory and a new sense of hope is reborn. New faces in different cities and finally, you can start to think “This could be our year.”

A main part of what makes baseball so great is the sentimental history, tradition and a respect for those who came before.

On this Opening Day, take a moment to celebrate baseball’s past by reliving the last 100+ years of Opening Days. 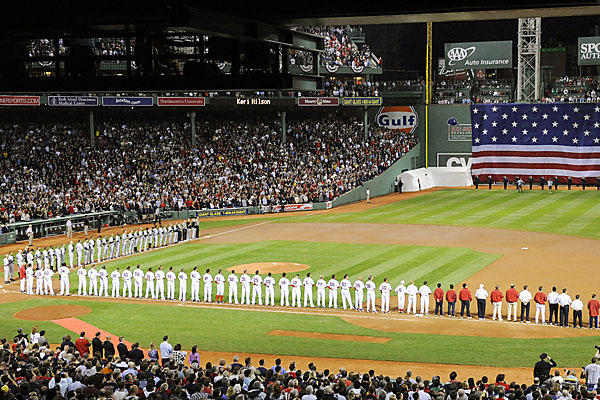 Because baseball has such a love of history, here are some of the best facts about Opening Day from The History Channel. Be sure to check out their website for the rest of them.

On the first day of the 1910 season, William Howard Taft became the first president to throw the. Since then, every president besides Jimmy Carter has thrown at least one ceremonial first ball for Opening Day, the All-Star Game or the World Series.

There has only been one no-hitter in Opening Day history. Cleveland pitcher Bob Feller, then just 21 years old, threw it against the Chicago White Sox at Comiskey Park on April 16, 1940.

Jackie Robinson broke the color barrier on Opening Day in 1947, becoming the first African American to play for a Major League team. The 28-year-old made his debut at Ebbets Field, playing first base for the Brooklyn Dodgers.

Out of the Park

Hank Aaron of the Atlanta Braves hit his 714th home run on Opening Day in 1974, tying Babe Ruth for most career homers. He beat Ruth’s record later that week and reached 755 by the end of this career. Aaron’s record was not eclipsed until Barry Bonds hit his 756th home run in 2007.

Hall of Famer Frank Robinson and Ken Griffey Jr. share the record for most career home runs on the first day of the season, with eight Opening Day homers each.