During Comic Con, some comments by Director Peter Jackson about extra Hobbit footage caused many to speculate that a third film would be on the way. Well today, our collective nerd wishes have been granted as Jackson himself confirmed via his Facebook page that we are to indeed see a third Hobbit film.

I have purposely delayed in posting anything regarding this in hopes that I wouldn’t jinx it, but this is by far the best news since it was announced that Peter Jackson would be taking over the director duties. This announcement puts the entire Hobbit/LOTR franchise on the level of Star Wars. And in my opinion, blows the water out of any movie franchise to date.

No plot or release date has been announced just yet. Rumors are the movie is to be set in the time between the Hobbit and Lord of the Rings. Which means, we probably get to see the little half-lings of Frodo and Sam grow up, Aragorn’s time spent as a Ranger, the glory days of Rivendell and perhaps even the close friendship Gandalf and Saurmon once shared.

For those that worry that two Hobbit films, much less three, is over kill, I say pipe down. Peter Jackson is a Tolkien genius and his film adaptions of the famous literary books have been welcomed with open arms by Tolkien experts worldwide.

Either way, huge HUGE news. When more details become available, you can count on us to deliver. Now, join me in doing several fist pumps and cart wheels at this wonderful news. 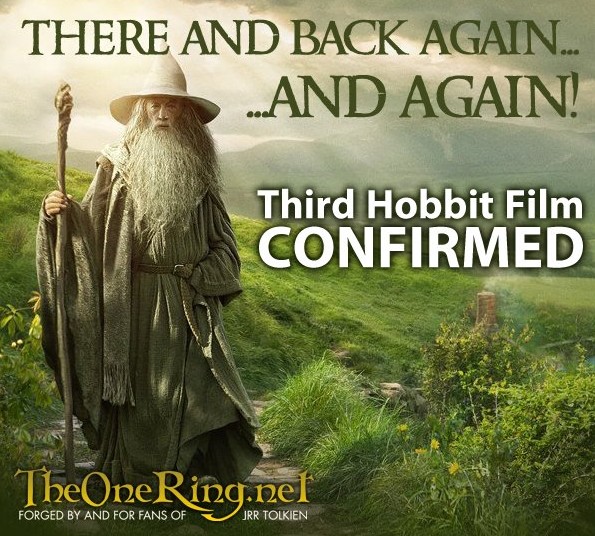