For the 4th year in a row, we have had the honor of hosting an all girl’s fantasy football league that is held around the concept of helping as many women understand how to play the “game within a game” so that they can feel confident enough to go off into other leagues of their own and know how the game is played.

This year, the league featured 7 newcomers along with 5 that have played in previous years. My motto as league commish has always been to make each year better and this year was no exception.

While there are pros and cons to each, I prefer to have this league draft at a local sports bar rather than a house for a few reasons. No cleanup is involved, most sports bars are very accommodating with food/drink specials, access to large tables and it makes it easy to have a good girls night out once the draft is complete.

Plus it’s always great to see the looks on people’s faces when they see an all-female fantasy football draft taking place!

This year we held it in Jacksonville Beach at one of my favorite bars, Snappers. Two league participants actually work at the bar which at the beginning wasn’t worrisome until one of the girls in the league actually had to work that night and was unable to attend the draft. Rookie mistake on her part but we will let it slide considering it was her first draft and she actually had no idea she had to be present for the draft. Hopefully she knows better next time but let this be a lesson to all of you, unless there is a death in the family, no excuse is good enough to miss a live draft party.

Snappers always has a good crowd, an awesome DJ (after the draft of course) and they gave us free reign over a semi-private but still large draft party room with our own bartender. Which is much needed considering the amount of alcohol this particular group can take in. I highly recommend having your draft away from the house if you like your draft to be a more social but still business affair.
Draft Board Software Upgrade 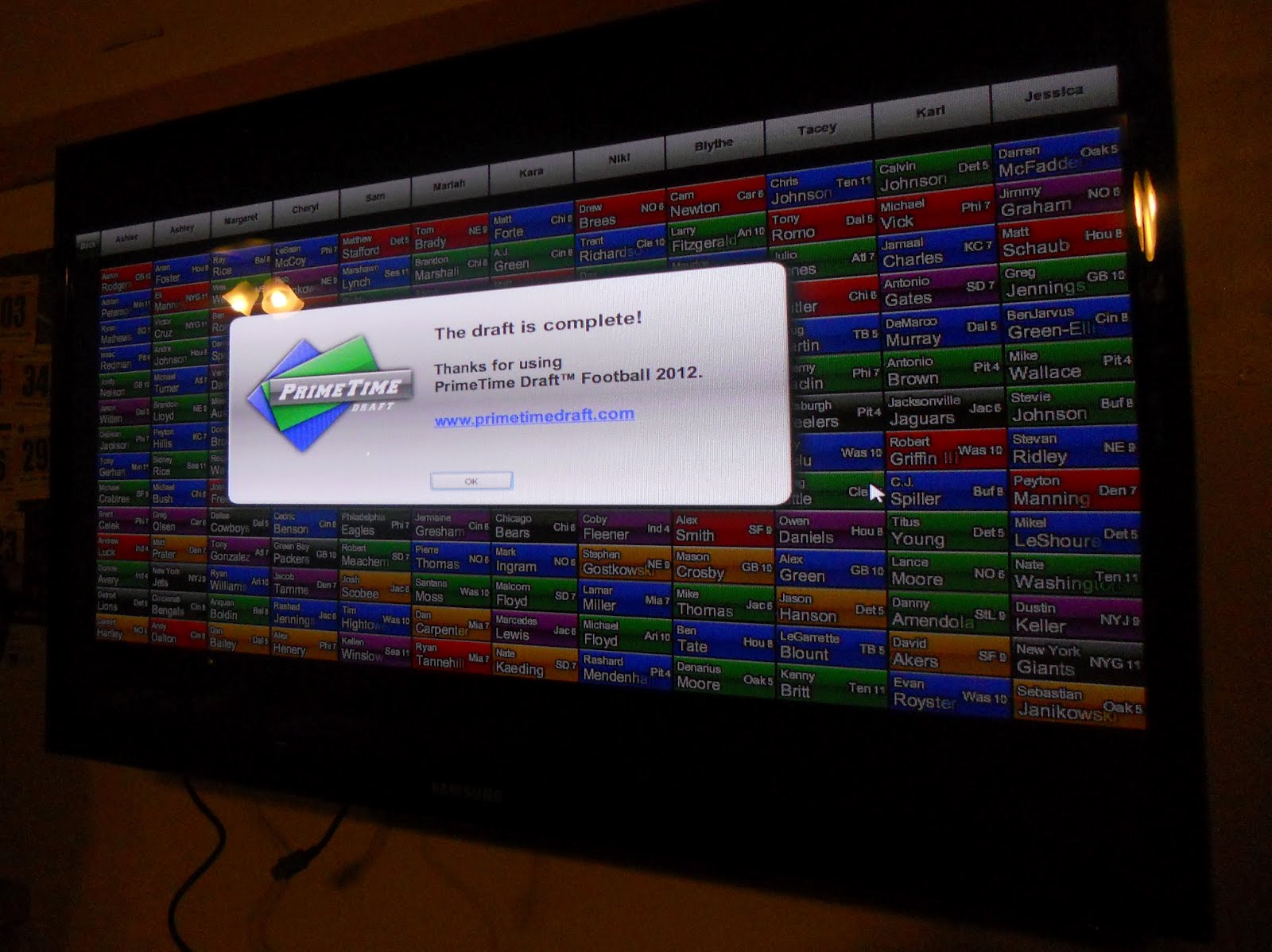 Last year was our first foray into using a digital draft board and while it didn’t go so smooth in 2011, this year was much different mostly because we switched to a great software program called PrimeTime Draft Football.

Draft orders, league settings, IDP options, draft pick times are all fully customized. The player positions are color coded so that you can tell from a glance which positions are going quickly or to gauge on how long to wait to take a position like a defense or tight-end.

One of my favorite parts about the software was that if a player hadn’t picked by the given time (two minutes for us) a very loud and somewhat intimidating horn played to make that person choose a player already. Most veteran fantasy football players can tell you that waiting an eternity for someone to make a pick is sometimes agonizing so the horn going off forced them to make a pick within a few seconds of it sounding.

Choosing PrimeTime Draft as our digital draft board software went flawless. While I did hear a suggestion from a league player that she wished the color key code for the positions could have been on the screen too, all it would have taken for this is for her to simply write it down herself.

The upgrade from using a standard draft board to digital will become the ultimate Commish’s dream when the day comes that you can upload your picks to any of the major fantasy sites.

Like I previously said, I always try to make the league bigger and better each year and this year was no different.

I bought Jaguar inspired cupcakes from a local bakery Cupcake Girls that were absolutely delicious and provided the girls with some free GuysGirl swag like sunglasses, brush/mirror sets and t-shirts.

One of my favorite perks was I created a fantasy football pop quiz based on our league rules. Whoever got the most questions right won a free Football Emergency Kit that contain a small backpack (perfect for games) that contained travel sized portions of deodorant, oil absorbing sheets, lip gloss, body spray, sunglasses, a hair tie and other little nick nacks you might need on game day. 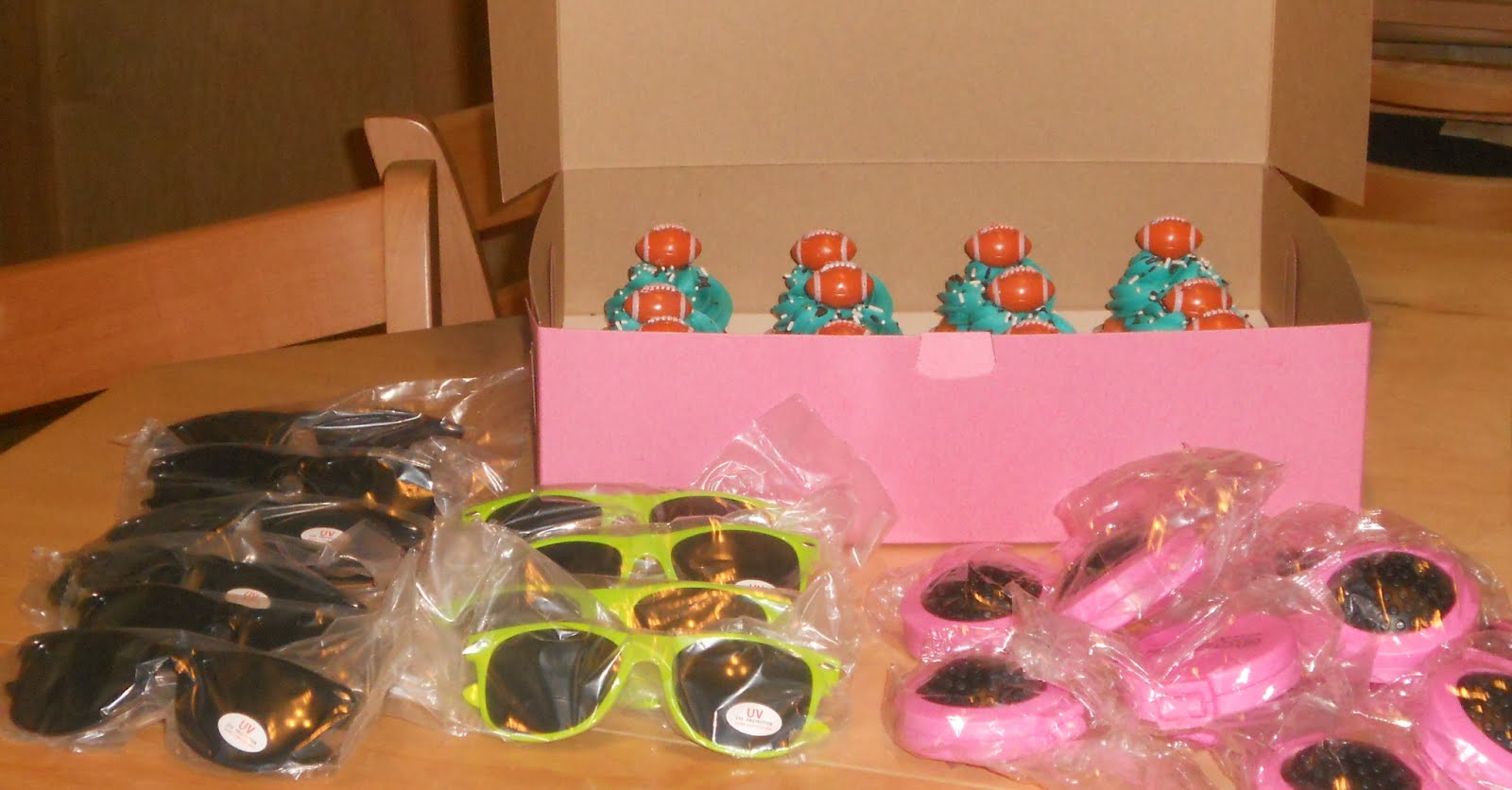 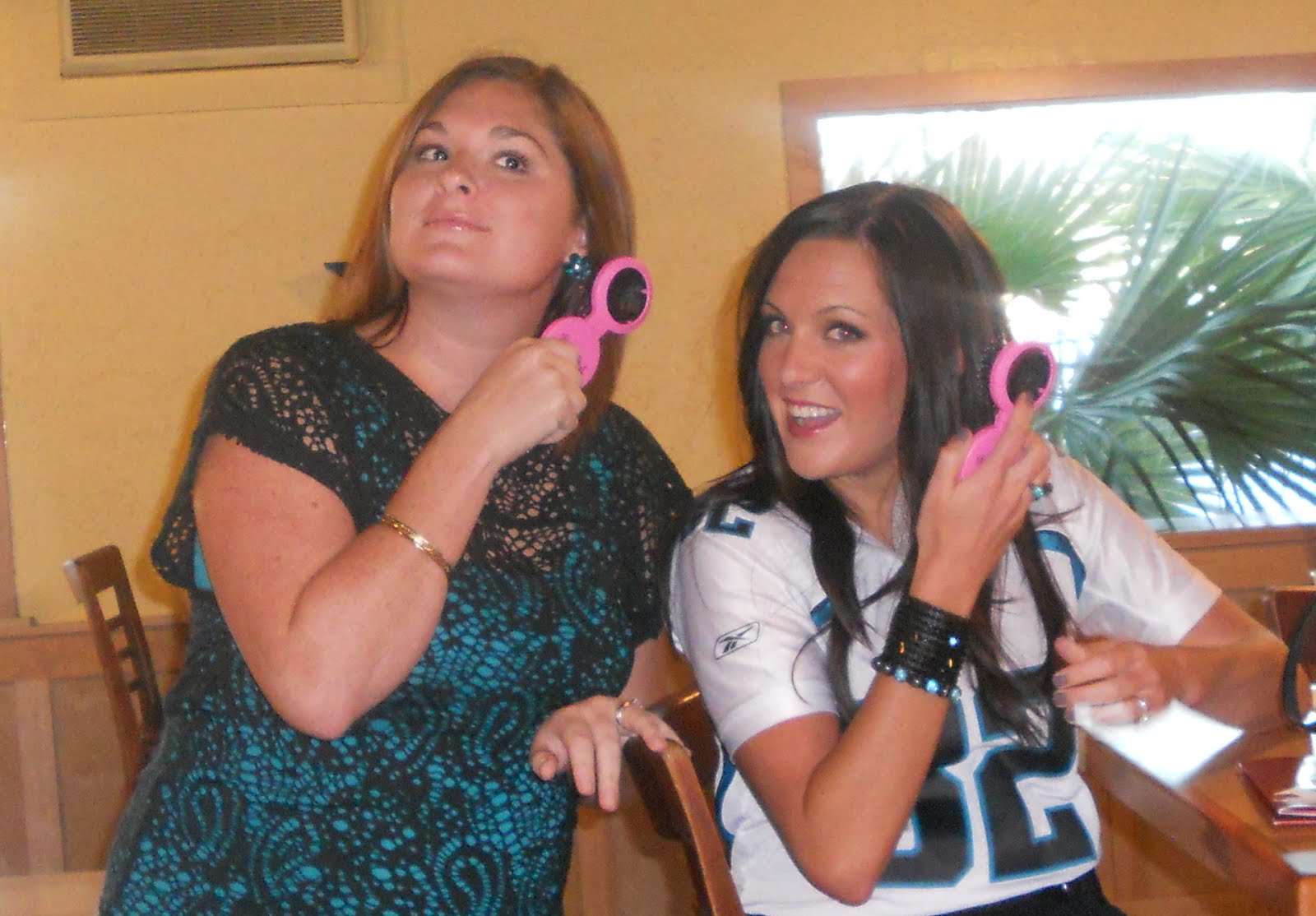 For having 7 new girls in the league that had never played a lick of fantasy football, these girls all did extremely well. Everyone came prepared with their own notes, pens, highlighters and not one texted their significant other’s on “who they should take”.

Rules like “not taking a kicker until the last round” and “going with the BAP” were all followed by most (if not everyone) who played in the league. Only exception is the Gator homer Cheryl who took Tebow as her backup QB. Which she was quickly ridiculed for. As she should have been!

Here are some pics of the girls hard a work. 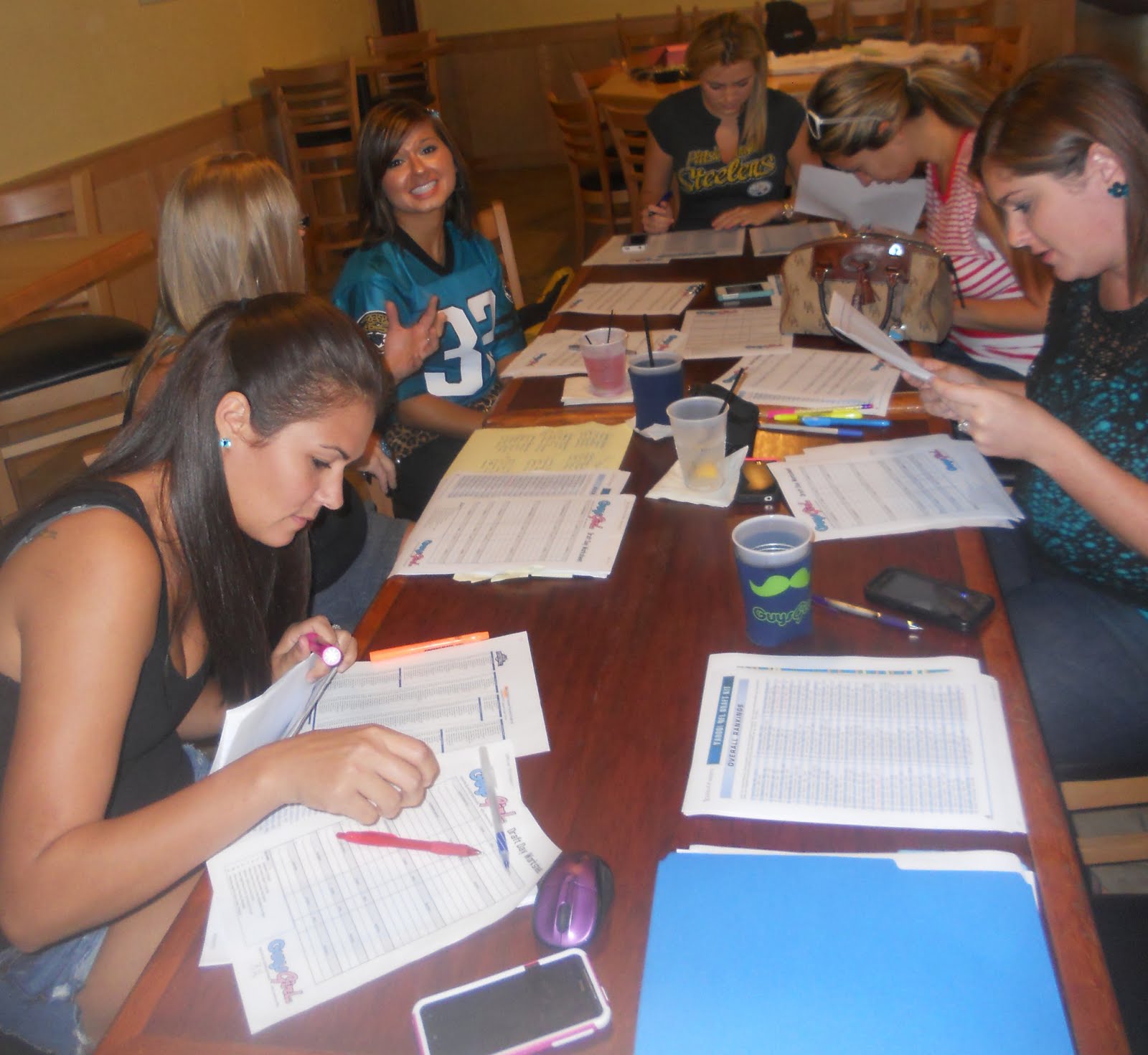 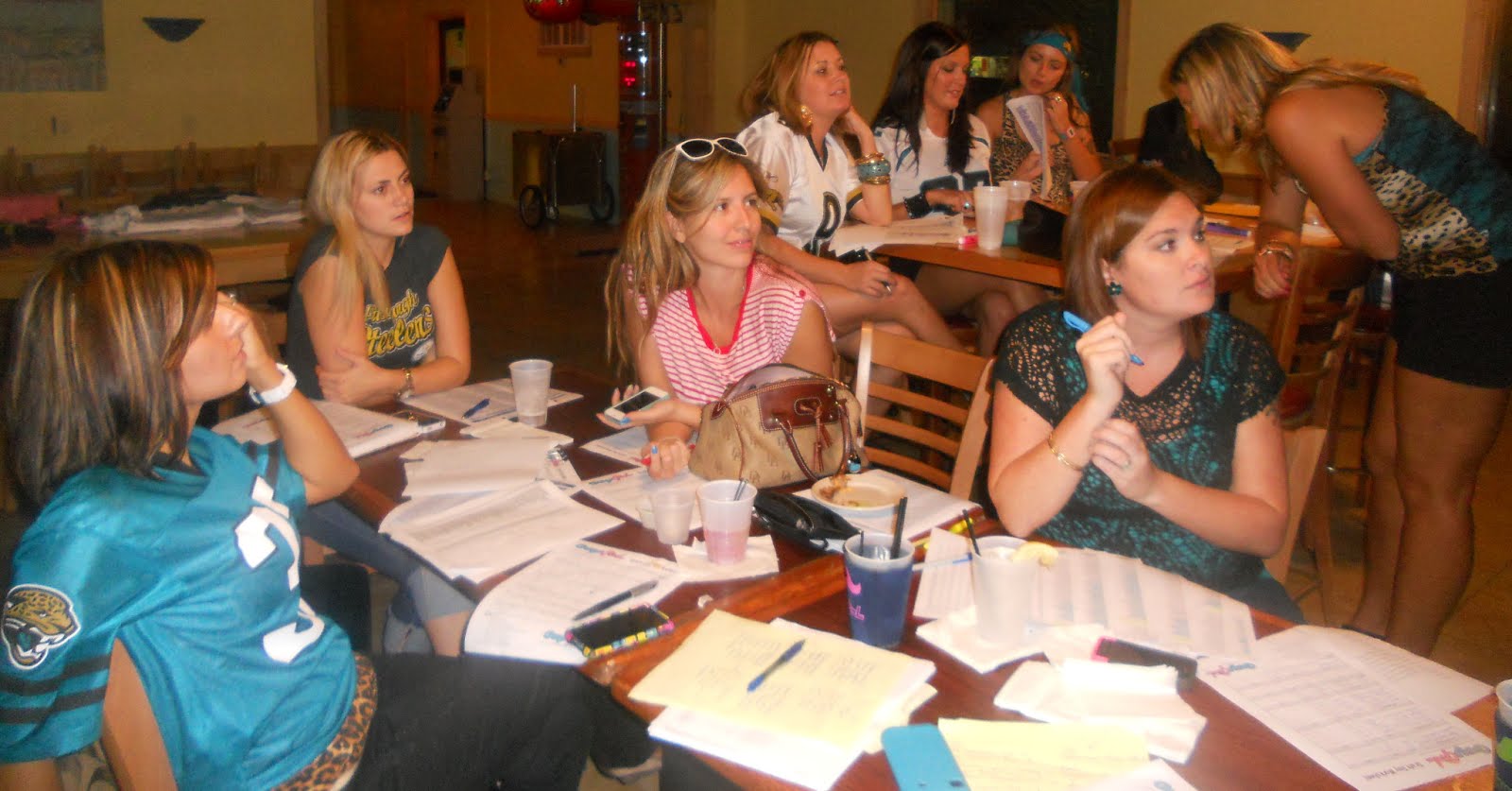 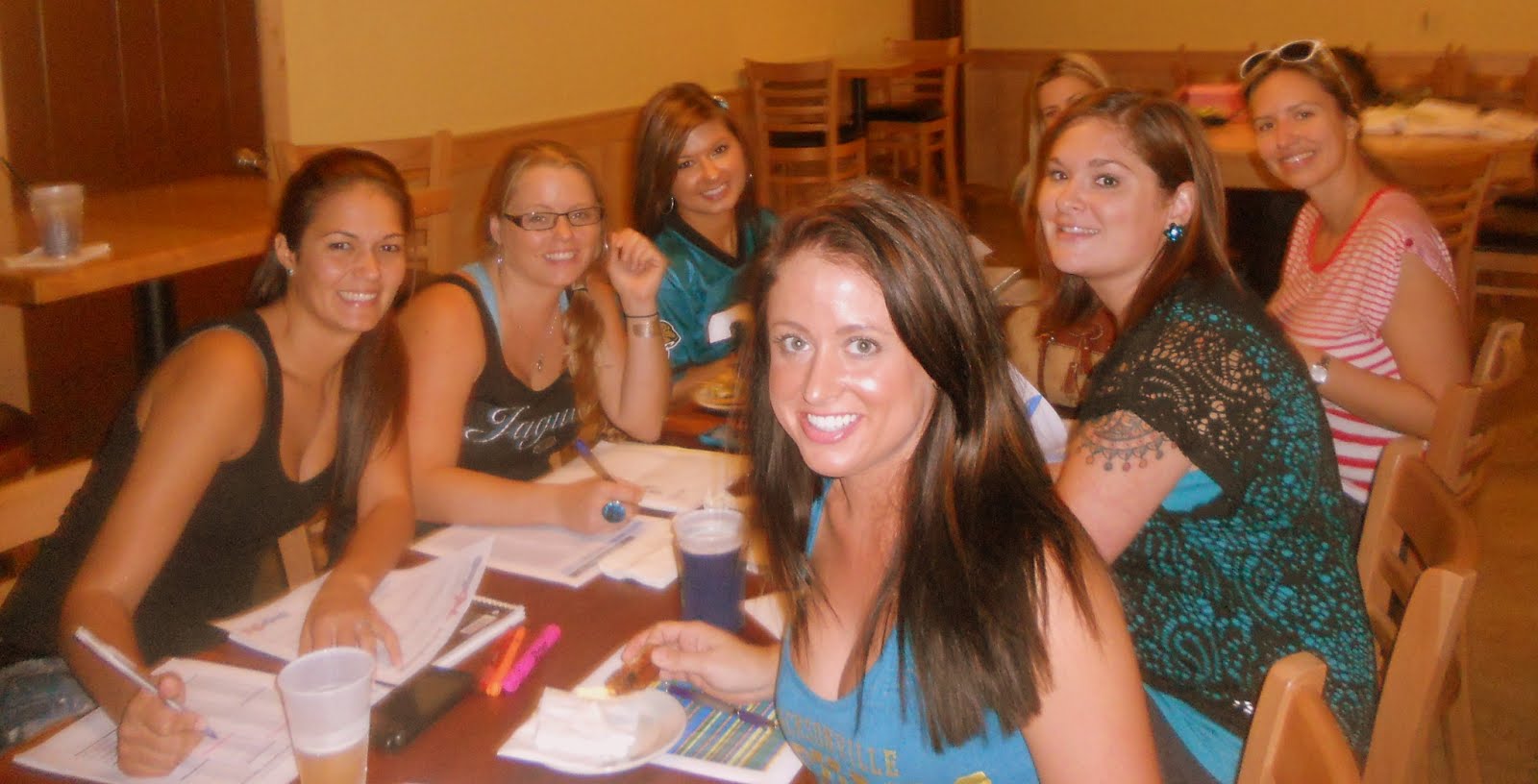 A big theme of the draft was to dress in your best NFL gear but Kari found the following idea on Pinterest. Her nails are actually a football field. Loved it! 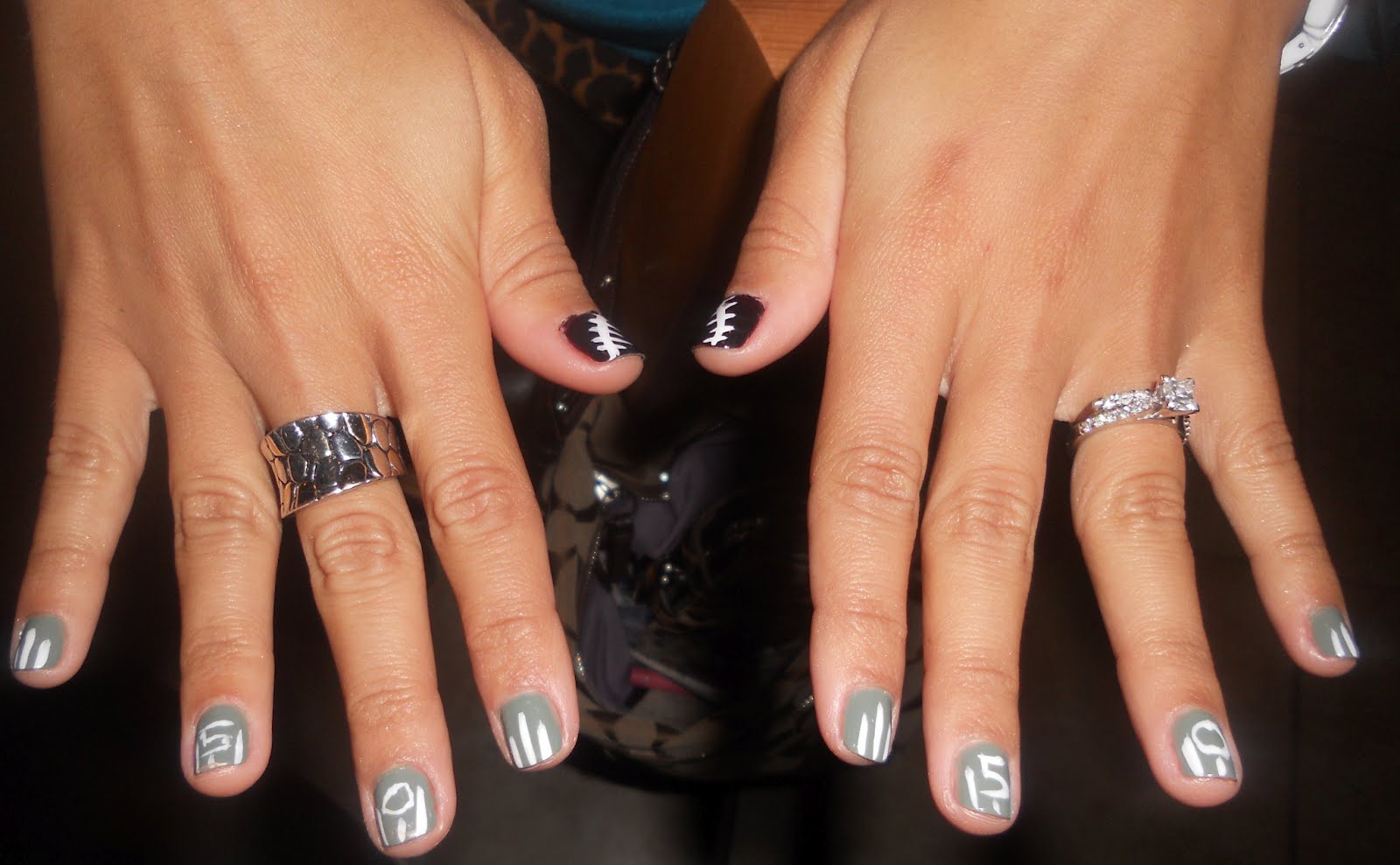 I know I might be considered biased in saying this, but this by far the smartest [not to mention good looking!] league we have ever assembled. Below are the picks in order of how the draft turned out. 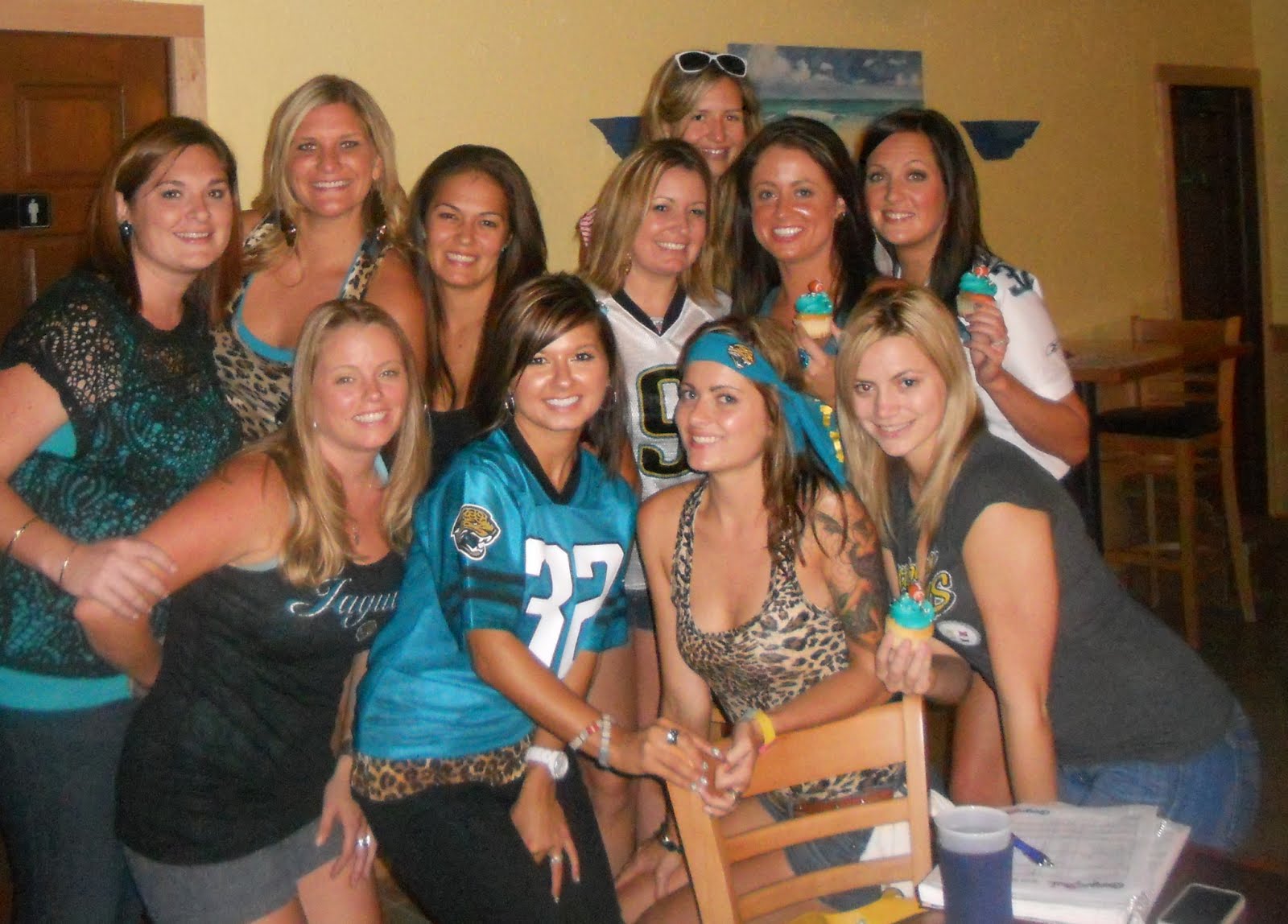