Female-run website takes the guesswork out of Fantasy Football rankings

It’s that time of the year where every Fantasy Football nerd has either already drafted their hopeful-Championship squad or scouring the internet in hopes of finding the best ranking system of the top players in the league that will lead them to the promised land.

Turns out, the perfect ranking system has already been in place for years. This person visits the top sites like Yahoo, NFL, ESPN, CBS, Rotoworld etc…and combines all of these player rankings (11 total) into one spreadsheet that averages each players suggested draft position into a perfectly positional, color-coded spreadsheet of glory.

And it’s all done by a woman…. 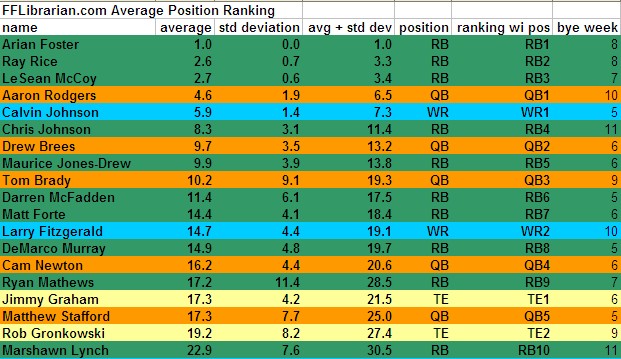 Her name is simply known as the “Fantasy Football Librarian” and for several years, she has been my go-to website for all things fantasy football. Her Average Football Rankings has been hugely successful not only because of her method used, but the fact she adds in the bye weeks next to the player’s name and also lists the 11 sources she has on other tabs within the spreadsheet.


Best news of all? She provides it for free and you don’t even have to give her your email address.

I don’t mess with 12 different websites giving me their biased opinions based on team allegiances or who they want to score an interview with, I go with the facts and this chick has been consistently making fantasy football stats manageable for the busy population that is the NFL Fan base.

And it’s not just the initial draft positional ranking that keeps me coming back but every week during the regular season she also has a consensus start/sit list based off the same theory of gathering the information from several different sources.

So if you are tired of checking dozens of sites for the best Fantasy Football stats, I suggest you save yourself some time and hit up one site for your entire season.