An older guy appeared, opened the box office counter, and waved me over to buy a ticket. I hesitated, then, shuffled over and mumbled my request.

After gathering a soda, popcorn, and my last shred of dignity, I handed my pass to the usher in the lobby. He looked at the ticket and smirked at me.

“Magic Mike, huh?” he laughed as he handed me the stub.

Hit the jump to continue reading…. 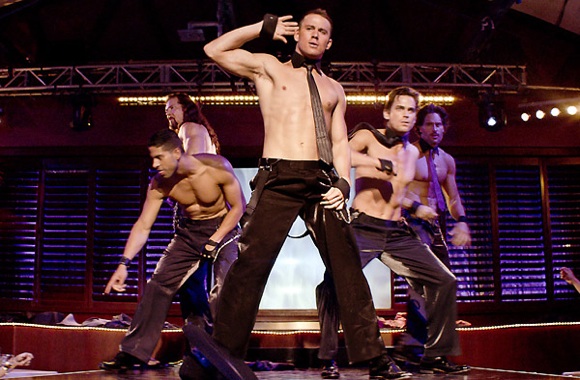 “I’m writing a review,” I said, as I tip toed in, thinking this was the only reason a guy would watch this film. What could a straight man possibly get out of a movie about male strippers?

Channing Tatum is Mike Lane, aka Magic Mike when he’s on stage. Mike meets a slacker named Adam (Alex Pettyfer) and mentors him into the world of stripping for tips.

Mike and crew, including club owner Dallas (Matthew McConaughey), and veteran dancer, Tarzan (wrestler Kevin Nash) party it up with drugs, drink and women. While Magic Mike sheds clothes for the crowds, Mike Lane builds himself in other ways. In a great scene with Adam’s sister, Mike tells her “I am not my job.” He has goals and this is merely a chapter in his book.

Mike juggles his nightlife with several other money making ventures, all in the pursuit of starting his own business. Tatum delivers an honesty that I’ve never seen in his other works. Club scenes become more story driven, focusing on less skin and more conflict as the film progresses.

He also faces responsibility for Adam’s exposure to this new world, relationships with women he meets at the club and newfound feelings for Adam’s sister. I was surprised how relatable Mike became to me, a regular guy, without six pack abs.

Is Magic Mike for guys? It has elements guys can appreciate but at least one scene involving male enhancement that will make any dude cringe. Guys will get to see some female nudity, including Olivia Munn’s (formally of G4’s Attack of the Show) first cinematic topless scene and the soundtrack is worth checking out.

Magic Mike won’t garner an Oscar nomination or leave a huge impression. There’s a story there but it’s nothing earth shattering. The greatest trick Magic Mike pulls is bringing the ladies in for a show and leaving the guys with a relatable experience. And a desire to get abs.

Unless you really want to see guys dancing in costumes, or you’re dragged to this on a date, let Magic Mike disappear. This wasn’t meant for guys but if you end up watching it, it’s not as bad as you think.