A good New York Yankees team is good for baseball It’s the beginning of April and the scene is set for another season of America’s Pastime. The iconic ballparks begin to fill with their bright team colors as the smell of kettle corn and hotdogs fill the warm spring air.

Imagine sitting in the bleachers and looking out onto the grass and clay and the picture could only be more clearly painted if Norman Rockwell were holding the brush.

The scene was similar in Yankee Stadium, where baseball was coming alive. The rich navy blue and pinstripes filled the seats. As with the start of any sport’s season, excitement pumped through the veins of fans and team members alike. Masahiro Tanaka took to the mound for the start of a season that was honestly a bit of a question mark all around. The Yankee nation collectively held their breath as that first pitch was tossed across home plate…

The questions got answered in a hurry as the first half of the season has come to an end. The second half has just begun. The question marks that loomed over the Yankees squad have all but disappeared as they’ve handily earned first place in the AL East. Guys like Mark Teixeira and Chase Headley are making plays. C.C. Sabathia, Masahiro Tanaka, and Ivan Nova provide solid coverage at the pitchers mound. And let us not forget how Alex Rodriguez has surprised us all: 303 at bats, 50 runs, 19 home runs, and a batting average of .277, breaking records set by Willie Mays and even The Captain, Derek Jeter. Homers abound and defensive coverage gets better each game. This is a team that is (legitimately) primed for playoffs for the first time since 2012.

But does this Bronx Bombers fanfare and pageantry span outside the hallowed walls of Yankee Stadium?

The Yankees have continued to be shrouded in a cloud of misdirected envy due to the franchise’s financial situation. The phrase “the Yankees buy their players” has been uttered too many times to count. And with the homecoming of A-Rod and the drama and media that follows baseball’s fallen hero, the backlash continues onward.

(And it’s easy to hate a team that put together a squad like the Yankees did in 2009 because man they were good.) 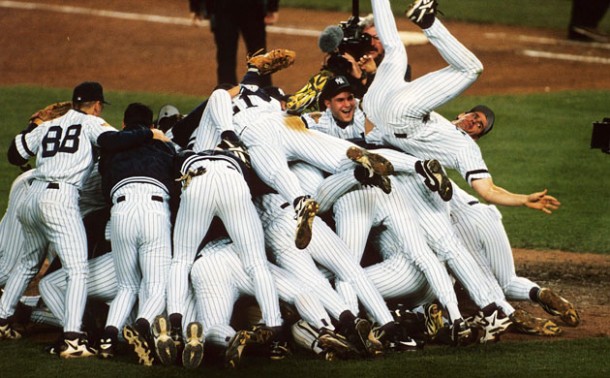 However, dark times have descended on the golden gods over the last three years. The team hasn’t seen a playoff game since 2012 and they haven’t seen the world series since 2009.

This season that started off with so many questions has been a ray of sunlight to Yankees fans around the globe. It’s ignited old rivalries and brought the boys in blue back to being the team that everyone loves to hate.

And it all comes to a single point: a good New York Yankees team is a good thing for baseball.

Everyone needs a healthy dose of humble pie from time to time and the Yankees were humbled like no other over the past few years. It kept the natural balance of things. But balance has been restored to baseball. The Yankees are finally seeing a time of plenty. They’ve wandered the wilderness in lean times, hunkered down, and worked hard to come back with a vengeance.

It’s not just good for Yankees fans. It’s good for everybody who calls themselves a baseball fan. Television ratings improve when the Yankees are present in the playoffs and casual fans engage more often and for longer with baseball when New York is relevant in October. I want whatever it takes for nominal baseball fans to get more exposure to the great game, and if that means success for the Yankees, well, that’s a small price to pay.

With several weeks left until playoffs, they’ll need to continue down this path, trudging forward, Joe Girardi at the helm, everyone making their way to the Fall Classic.

And I, a faithful member of Yankee Nation, will lumber along with this team. We know good times and bad, and we’ll bask in the glow for now. Regardless of where the road leads we’ll stick by. How could we not? This 2015 team is the ultimate picture of squad goals.

Here’s to you, boys.