Is Princess Leia the Most Badass Disney Princess of All Time? All Disney Princesses are strong women in their own right. But with the purchase of Star Wars, many assumed Princess Leia instantly became the most powerful of them all.

A few years back, Disney shocked the world when they announced they would be buying LucasArts, the company that owns and operates the movie blockbuster franchises of Star Wars and Indiana Jones for $4-billion dollars.

With Princess Leia joining a long list of other famous Disney princesses, it got us to thinking: Is she automatically the most badass Disney Princess of them all? When you think of “badass Disney Princesses” Cinderella is not something that immediately comes to mind. But as Sarah from Nerd Bastards pointed out, during the age of early Disney classic movies, Cinderella did not fit the “damsel in distress” persona of Snow White and Sleeping Beauty.

Cinderella was a dreamer who spent her days scrubbing floors and dealing with sisters that would cause many to run away from years ago. She was invited to *the* Ball and along with her mouse friends, spent hours making her own dress only to have her evil sisters rip it to shreds.

Did she fight back? Nope. She killed them with kindness and was ultimately awarded with the prize of a Fairy God Mother who gave her all the rich societal tools needed to bag her a Prince.

Never underestimate the power of working hard, being humble and killing people with kindness; even when they are the ones who deserve the least.

No. 6 Tiana from The Princess and the Frog As a relative newcomer to the Disney Princess lineup, Tiana had some pretty big shoes to fill. But she not disappoint. Tiana wasn’t interested in trying to be a gold digger like her best friend. She was more interested in turning HER entrepreneurial dream into a reality. And when she was wrapped up in problems she never wanted to be a part of, she didn’t fade away and succumb to this defeat.

Instead she picked herself up, broke the spell that turned her into a frog, ignored offers from evil Voo Doo master and eventually opened up her very own restaurant no matter how many obstacles were in her way.

No. 5 Ariel from The Little Mermaid Ariel was one of the first princesses who was born as a Princess without having to marry into a royal family. Sure, she got forks confused has a hairbrush and possibly abandoned her friends which included a fish and bossy crab in order to be with a man, but can you really blame her? Prince Eric is probably the hottest when it comes to Disney Princes and Ariel won him over without having a damn voice.

And as revafriedel from Twitter pointed out, even after Ursula tried to look and sound just like Ariel, while Eric rammed his boat to kill the evil witch, it was Ariel that saved Eric, twice. Saving your man from an evil sea witch and possible drowning while technically losing your voice as a mutant fish definitely qualifies you as bad ass.

No. 4 Nala from The Lion King 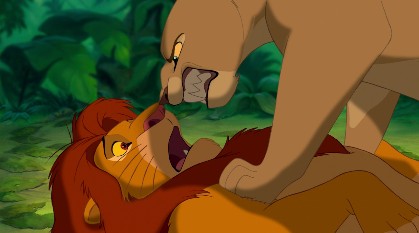 Sure, Nala is a lioness. But she still counts as a Disney Princess. Not sure how she made the list? Allow me to explain.

As cubs, Nala was always trying to keep Simba out of trouble. She was the responsible one and no matter how many times she told that boy Simba the right thing to do, he didn’t listen. So the end result included the entire lion kingdom left in shambles while Simba runs away to try and “find himself”.

And who was left to hunt for the pack and take care of the kingdom? Nala. Who stood up to Scar while everyone else bowed down to him? Nala. Who eventually found Simba and convinced him to take his spot as rightful King? Nala.

Whole damn country, well…. “everything the light touches” and its population was saved because of Nala.

No. 3 Belle from Beauty and the Beast Belle was another one of the early Princesses who wasn’t born into royalty, but rather earned her way into it. She spent her days reading books and taking care of her Pops, whom most in the town called crazy. But as family does, they always had each others back.

Belle even refused the advances of the “what looks good on paper” Gaston. When the arrogant SOB didn’t get his way and found out Belle was hanging out with someone much hairier in the Beast, he actually tried to kill him.

But as true love prevails all, Belle stood her ground, saved her father, didn’t take any shit from back-talkin’ household objects and eventually saw through the Beast’s hairy appearance to what he really was, a hot and rich Prince.

No. 2 Princess Leia from Star Wars IV, V and VI Now I know, most of you would probably assume Princess Leia would top this list. But she has some big shoes to fill.

Sure, she’s the only gun-wielding chick out of the group, single handedly strangled Jabba the Hut to death and only 1 of 6 females in the Star Wars movies that actually matter.

But what kept her from the top spot was the point Twitter user hls_ndtex reminded me that she did in fact make out with her own brother and watched as her father blew up her home planet. All the other Disney Princesses saved their home, except for Leia.

But in the end she did nab the sexy Han Solo in his prime, which was really tough for me to not give her the top spot automatically.

The Most Badass of them all: Jasmine from Aladdin When Twitter was polled earlier, most people all said Jasmine was the most badass Disney Princess of them all. And I agree.

She was born into the royal role and frankly didn’t want it. She hated the fact she was going to be forced to marry some loser so she ran away and fell in love with a homeless street rat.

When Aladdin found out he had to be rich to win her love, he fought tooth and nail against Jafar. And as The Subway Domer put it, when times got tough for Aladdin, Jasmine went to bat to seduce Jafar to help out her man.

Do you guys agree with this list? Did we leave someone out? Let us know on twitter.

And just for shits and giggles. I felt this picture of Jasmine, Ariel and Belle was appropriate, given the news and all.