Why the Dream Team argument is a waste of time

Normally fans and media start the argument but this time the culprit is Kobe Bryant. Bryant told reporters in Las Vegas that this year’s team could beat the Dream Team if they faced each other in their primes.  Bryant said that the 2012 team has a bunch of race horses, guys who are athletic and that the Dream Team consisted of guys who were at the tail end of their careers.

Kobe what the hell? Shut that up! This squad isn’t touching the Dream Team. 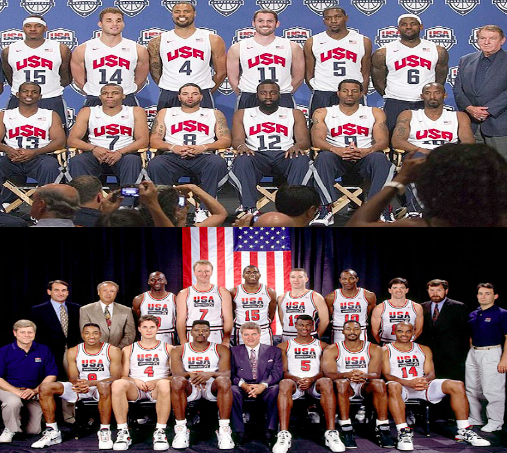 Here’s what (sp) pro Charles Barkley had to say when he spoke to ESPN,”Oh yeah, that’s no disrespect. I ain’t got to badmouth them. But like I said, their point guards weren’t going to beat us. That’s a no-brainer.”

“I just started laughing,” Barkley said. “How old is Kobe Bryant? He’s 34? And he’s calling us old? At the time, we were only like 28, 29. Michael Jordan and me were the same age. We were both 29. … Other than Kobe, LeBron (James) and Kevin Durant, I don’t think anybody else on that team makes our team.”

That was Wednesday. Michael Jordan chimed in on Thursday telling the associated press that he laughed when he heard Bryant’s comments.

Jordan said there’s “no comparison” which team is better.

“For him to compare those two teams is not one of the smarter things he ever could have done.”
Jordan then spoke about the Dream Team’s experience.

“Most of us were in the prime of our careers, at a point where athleticism doesn’t really matter. You have to know how to play the game,” said Jordan.

If Kobe wants to compare squads he should compare the Redeem Team with this current squad…not the Dream Team.
Magic Johnson added to the conversation tweeting, “No chance this year’s team would take us.”

Scottie Pippen called his team well-rounded but said that his team would beat this team by 25 points.

Larry Bird took the high road when he told ESPN that he hadn’t played in over 20 years. Come on Birdie…not present day. I guess he’s not giving this conversation any play and who can blame him; it’s dumb.

I think my friend and former colleague Rahshaun Haylock put it best when he posted this on Facebook, “‎20 years later we’re not only talking about but celebrating the Dream Team. I don’t think we’ll be talking about this team 20 years later.”

Exactly! Will we even care about some of these guys in 20 years? We remember the 2004 team because they lost but we don’t talk about the impact of the 2008 Redeem Team…other than the fact that they won, like we feel the U.S is supposed too; a precedence set by the Dream Team.

I’m with Sir Charles on the fact that only three players on this team would probably even be qualified to play on the Dream Team. I’ll let all of you debate on which three would qualify but once again this team hasn’t won anything yet.

I think that’s what gets my goose about modern day athletes; they crown themselves before time and we give them air play. Don’t get me wrong Kobe is Kobe he’s a champ…no doubt but the 2012 team hasn’t won the gold yet. I’m not saying they won’t I’m just saying that these “youngstahs” need to slow down a bit.

“For him to make that comparison, it’s one of those things where it creates conversation. I guess we’ll never know. I’d like to think that we had 11 Hall of Famers on that team and whenever they get 11 Hall of Famers you call and ask me who had the better Dream Team. Remember now, they learned from us. We didn’t learn from them.”